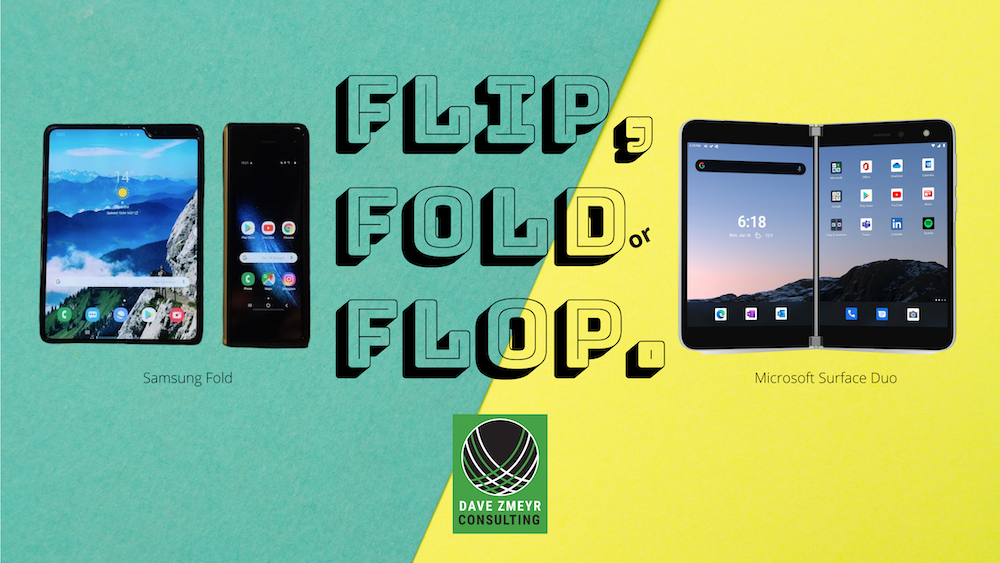 Okay, it has been a little over a year since Samsung released the first true production folding phone to the World. At $2000 was this little gem worth it?

This depends on your perspective and how you want to use it (and, well, if you have two grand lying around with nothing to do).

My perspective tends to be from a business user; I live in business apps (Email, Teams, text, and phone) most of the day.  I’m an avid written communicator so anything that helps me stay off of phone calls is a plus for me and is where I center my activities.

I do not play games and prefer not to watch videos on a small screen, though will if pressed.  I’m also a newsy, so any of the major news apps (paid and unpaid) are on my devices.

So ….is it just a gimmick? Let’s talk about the two contenders in this space.

The screen being a gimmick depends on how much you crave a just a little bit of extra real estate.  With the front screen being as small on the original Fold (something corrected on the new Fold that was just released), the device is literally like carrying around a brick.  Other than notifications, the front screen is useless and in the event you want to use it to whip out your device and take a quick photo, the screen resistantly ignores the multiple attempts to flick the camera icon and bring the camera up (and then it’s way too easy to hit the wrong camera mode button on the screen when trying to indicate the object of focus).  By then the shot is gone.

But unfold it and like a flower behold the beauty!  While the crease is definitely noticeable (and your finger feels it and wants to not know it is there) you are immersed in a huge screen that is very functional in using most apps.  You can run multiple apps (up to 3) at once, though I found positioning and opening and closing a bit unintuitive. And, in a way, the loss of real estate of having two apps open really seemed to make the ability to do this useless in the end.

One app open on this device is sublime, two apps open seem a little ‘squozen’ in a narrower than normal size screen and three apps just seemed worthless. You’re back to having a minute size screen for two of them which is the antithesis of what this phone is supposed to deliver.

So let’s stick with what it does well.  You hold it to your ear as a fairly well proportioned (though a tad bit thick) phone for crystal clear calls, snap it open to perform work or answer a text, snap it closed (quite satisfying) when done and pop it into your pocket.  The current gen processor sips power and while I don’t in practice make it to the end of the day without a top off, in a stretch I can.

The screen doesn’t feel fragile and I’ve had no scratches but I’m mindful that the sales person said “don’t use your finger nail to touch the screen that’s how we ruined ours” and I was always slightly terrified when I handed it to someone else to see.

With the new Z version of the Fold out, I expect much of my review to remain the same with the exception that you now have a phone you can use when it is unfolded.  There’s enough real estate on the closed phone to be able to perform most any normal smart phone function, though the ratio is a little tall for my taste.

As with all Samsung phones, picture quality, stability and speediness are really never an issue.

Let’s face it, Microsoft has just tried so hard to make a windows phone — and failed so greatly to attract the defining requirement of modern phones: apps. It is really amazing they’re willing to give this yet another try.

Microsoft came late to the game with their original Windows phone and they paid the price.  While they created an elegant, reliable and in some ways brilliant piece of hardware that ran for a couple of days on a charge, app writers were simply not willing to port their Android and iPhone apps over to Microsoft until there was an audience, and a lack of a apps prevented people from buying the phone to create that audience. Catch 22.

In the end Microsoft tried, tried, and tried. Gave up and tried again one last gasp with the HP Microsoft phone. It was truly a treasure but was discontinued a mere few months after its release. Imagine that R&D write off. Not to mention the ticked-off people who bought an expensive phone, only to be told it’s already at the end of its existence.

Fast forward to September 2020.  Microsoft has decided to release a two screen device (they refuse to call it a phone) and Samsung is about to release the latest version of its Fold which corrects all of the original deficiencies of their first version along with a real screen on the outside that is as usable as a normal phone. Inside is an even larger glorious tablet with a (ultra-thin) glass screen (still coated with plastic, but less plastic feeling).

Somehow Microsoft pulled their release date back out of a hat like a rabbit and managed to beat Samsung to the front door with their two-screen fold.

And there was much rejoicing?

Microsoft fell back into the Microsoft way of doing things on this one; build it, sell it, fix it.

Actually, amazingly, this is my favorite phone now.  Microsoft “flipped me” from Samsung and I’m totally “folded” into their ecosystem now!

Microsoft made a somewhat brilliant move a few years ago when the decided that they might not be able to ‘own’ all of the panes of glass (e.g. your computer screen, your phone screen, your tablet and watch and whatever other screen you use), but they could own the apps that most people use on a day to day basis.

In this category I mainly mean people who have money to pay for apps, such as businesspeople, rather than people who use free apps which essentially make you the product, in order to make money.

In the space of the Surface phone, er, Surface Duo, Microsoft chose to use Android (pure, non-forked, mainstream) and worked with Google to achieve a standard way of addressing multi-displays.  Microsoft then added their own launcher (the interface you look at) over the phone.

What they achieved is somewhat sublime in its simplicity.

First let’s get some uncomfortable talk about the negative reviews out of the way.  All the mainstream reviewers pretty much concluded that this is a beautifully constructed but deeply flawed machine.

It’s gorgeous in a white gloss, but not too glossy, glass finish.  It feels substantial but not too heavy.  It opens and shuts with just the right amount of resistance.  It has beautiful screens and while some don’t like the bezels my personal delight is I can finally grab a phone screen without clicking on something and having some app start running that I didn’t mean too!  It feels like a personal notebook of yesteryear, something someone might drop in their purse or portfolio and open when someone asks, “can you fit me in your calendar on Thursday”.

Yet its thin enough to be pocketed and light enough not to feel like a brick.  Putting this side by side with the Samsung is like modern versus industrial. It just exudes a beautiful finished artful look.

Samsung has been gradually getting us to look at thinner and taller form factor screens and Microsoft’s Duo is almost jarringly wide.  But it works.

Now let’s talk about where the reviewers all got it wrong.

Microsoft, like many companies, sends out review units before the product hits the shelves so that reviewers can have plenty of hands on time to launch their review on the same day that Microsoft releases their product.

Samsung sent out review units for the original fold that resulted in reporters yanking screens apart and a total fiasco of bad press. Microsoft, while not as bad, released a product whose software wasn’t quite baked until the day of their product launch.

Unfortunately, by the time I picked up my phone, the reviewers had released their review on the ‘old’ phone operating system which from what they say, was quite kludgy.

I hate it, I love it

I knew Microsoft had gone the Android route. I assumed it was just two screens. What I didn’t realize was that much like the first Apple iPhone that hit the streets, I had to learn gestures, button placement and actions that weren’t what I was used too.

While this is Android, it’s Android with all the things you do constantly (open an app, move an app, close an app) done differently.  And different, at least to me, equates to a learning curve that I have to force myself to get over in order to have an unbiased (or maybe newly biased) view on a product.

The first time I started to play with the Microsoft Duo I just hated it.  I couldn’t figure out how to close the app I just opened so I ended up just staring at one app and then giving up. It wasn’t until I read the TIPS and started learning a very few gestures that I figured out what I should have known all along.

Of all of the major software brands, perhaps no one is even on the same plane of existence as Microsoft when it comes to user interface (I probably would have said Apple was far better but Apple got on an interface and then basically didn’t change it for 10 years).

Microsoft has entire teams whose whole job is just to assign the musical notes to specific actions (start up, shut down, new message, error, etc.).  The attention to detail of how people should interact with an interface – the art form of it – is something that has always been Microsoft’s strong suit.

…and after a few days when I picked up my Duo and forced myself to learn a few new things, Microsoft engineering again shone through.

Gestures and buttons just make sense (so much so that it makes me wonder if Android won’t change to look like Microsoft’s button placement).  Having two screens that are physically separate, fully functional screens lets me start up another app without going through an unnatural few seconds of dragging it around and resizing it.  I’m on a phone call, I just open my calendar.  The path of least resistance. It just makes sense.

When the phone rings, I can open a little to see who it is (I actually use my watch, but for people who don’t have a smart watch) and if I want to take the call I open the phone up all the way.  When I’m done with a call I close the phone with a somewhat satisfying snap and the phone hangs up.  The joy of the original flip phone done horizontally – and most importantly just a natural gesture that you don’t have to even figure out to do.

While there are certainly things that I wish were different, and some things that aren’t there yet; not all apps rotate for example, so tent mode isn’t all that usable if you’re opening a news app that’s sideways, the current camera software is pretty slow and the comparing Samsung 6’s camera lenses to Microsoft’s is just no comparison – the basic bones are there and work well enough that I believe Microsoft has potentially created a new form factor that truly accomplishes what it intended to accomplish.

I’m smitten but at the same time it just makes me wonder….. what’s next?